I saw a couple of ads that amused me.

They amused me because they’re shit.

Before I show them to you, is anyone aware of particularly warm weather coming our way (in the UK)
this month? No? Okay then, here they are: 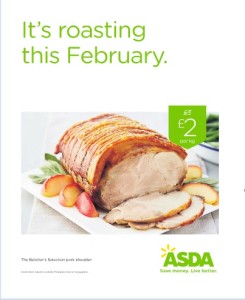 ‘It’s roasting this February?
An attempt at a clever headline? In respect of what? As per my earlier question, does it allude to warm weather we’re expecting this month? Is it just a joke about February not usually being hot? Is it a ‘dad joke’? What purpose does it serve?
The ad would’ve been better if they’d simply showed the roast and the price, and nothing else.

But no… Asda/their agency decided to follow up one irrelevant dad joke with another, two pages later:’ Hot showers forecast this February’.
It doesn’t even make sense – when have you ever heard a forecaster refer to ‘hot showers’, as opposed to just ‘showers’? Again, everyone knows that February is a cold month – it’s been that way since time immemorial. It’s not really a joke to point this out by way of a crap (attempted) pun.

I can only think that the copywriter completely lost the plot, or the client gave the agency a steer on some ‘hilarious lines’ that they ‘must include’ in this promo campaign.

Oh well, having viewed this nonsense, I might pop into Asda and take up their offer of 90p for a bottle of Palmolive shampoo – gives me something to wash my eyes out with.